A new Energy Bill should take the opportunity of setting out how combining energy policy and a new industrial policy can deliver for the economy.

For years the old Department for Energy and Climate Change (DECC) denied its policies did not take into consideration the concerns of energy intensive industry and other sections of industry which rely on competitive electricity prices – to the chagrin of Industry Ministers.

The abolition of DECC and the creation of a new Energy and Industrial Strategy department opens up the opportunity to deliver a new energy policy which prioritises costs, competitiveness and security of supply in the national economic interest after Brexit.

Furthermore, Prime Minister Theresa May’s new gGovernment needs to address the growing conflict of interest relating to National Grid and the growing use of interconnectors. Here’s why:

Introduction
The UK’s electricity system has suffered from poor public policy since the late 1990s. Since 1996, there have been 14 Energy Secretaries and 18 Ministers, leading to a confused energy policy. Energy policy in the UK has suffered from a series of damaging state interventions both at the domestic level and the European level – the latest of which is the Hinkley Point project, which represents poor value for money for taxpayers.In the post-Brexit world, this paper examines the problems caused by domestic and EU policy, and highlights the pathway that Britain should now seek to follow.UK’s Unilateral Energy and Climate Actions
Over the past decade, UK Governments have implemented a series of unilateral decarbonisation measures, which have led to rising costs for domestic and industrial energy consumers. The primary driver of the UK’s decarbonisation policy is contained within the Climate Change Act 2008. This committed the UK to a unilateral commitment of reducing net UK carbon dioxide emissions by 80% by 2050 compared to the year 1990. There are, however, a series of other unilateral energy and climate measures that burden UK energy consumers with added costs. These include:

Implications for Costs…..
To meet the UK’s commitments on energy and climate change, the Government has set out renewable energy subsidy limits under what is known as the Levy Control Framework. Britain is legally bound under the EU Renewables Obligation to supply 15% of all energy from renewables by 2020; this implies that over 30% of electricity must come from renewables by 2020.  Renewable energy subsidies, which are levied onto consumer energy bills, are set to reach £7.6bn a year by 2020-21 (in 2011-12 prices). Some of the cost will be paid directly by households and some of the costs will be levied onto industry, which households will also end up paying for through higher prices for products and services.

It is also important to note that the Levy Control Framework does not include network and some other costs associated with renewables. John Constable of the Renewable Energy Foundation estimates that these costs could add £5bn onto consumer bills in 2020.

Table 2: Costs of the Carbon Price Floor (Revenue raised by the UK Treasury)
Figures in £m

State intervention in the energy market has increased the costs even further…
Spending caps for renewable energy subsidies have been breached in all of the past three years, suggesting that the spending cap to 2020 will also be breached, according to research by Policy Exchange. Furthermore in July 2015 the Office of Budget Responsibility (OBR) stated that the costs for renewable energy subsidies will reach £9.1bn in 2020/21, some 20% over the £7.6bn forecast cap for that year.

Table 4: Wholesale Electricity Price Projections
Figures are in £s per MWh at 2013 prices

The EU’s policies are contributing to energy security issues
Although much of the UK’s poor energy policy originates from domestic legislation, there are a number of damaging EU initiatives, which have contributed the UK’s poor energy security.  In particular, EU directives are forcing coal plants to close too early and the equivalent baseload capacity is not being built, leading to a huge fall in Britain’s reliable electricity generation (see Figure 1). 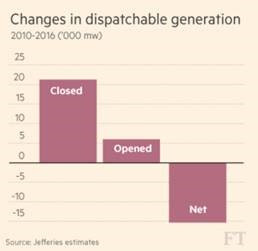 The Large Combustion Plant Directive has taken nearly 12 GW of coal and oil off stream since 2012 (see Table 5).

Furthermore, the Industrial Emissions Directive will see off the rest of the UK’s coal fleet by 2020-21, meaning that a further 11 GW of remaining coal will go, according to evidence given to an Energy and Climate Select Committee hearing. 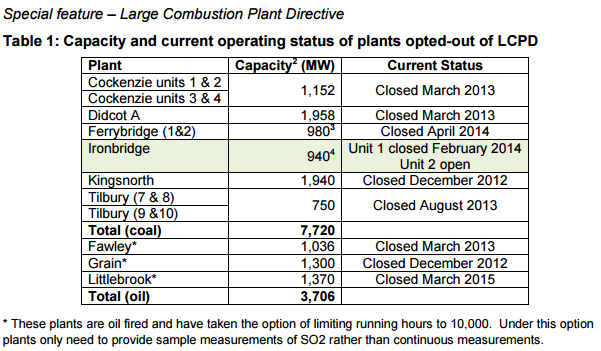 Concerns UK electricity security
National Grid’s Winter Outlook 2016/17 highlights the precarious state of the UK’s electricity generating system. Provisional derated capacity margins are estimated to be 5.5% with emergency balancing measures. Without the contingency balancing reserves, de-rated capacity margins for winter 2016/17 would have been the narrowest of margins at just 0.1%.

In an attempt to prop up the UK’s baseload power capacity, the Government has introduced subsidies for baseload power plants via the Capacity Market. Unfortunately, the Capacity Market’s flaw is that it does not appear to be encouraging new gas fired power stations into the UK’s electricity system. Based on the provisional auction results from the T-4 CM auction for 2019/20, existing CCGT plants were awarded 19,242 MW and new build CCGT plants were just awarded 2,566 MW. New gas plant equated to just over 10% of the Capacity Market’s gas contracts.  The next auction to be held in December will be critical.

Interconnector policy
The Government is keen to expand the use of undersea cables known as interconnectors to import more foreign electricity and avert power shortages at home. However, interconnectors should not be seen as an alternative to building new gas fired (CCGT) power plants.

Interconnectors will not always be able to provide the UK with the electricity it needs as supplies can be diverted to meet demand elsewhere.

Foreign electricity imported into Britain (from coal and gas plants on the Continent) will also enjoy an unfair advantage over electricity generated in Britain as the foreign generator will not have had to pay the GB Carbon Price Floor.  This raises the charge of severe market distortion and a possible Competition and Markets Authority challenge from British electricity generators.

More interconnectors will also depress the capacity market price, which would reduce the incentive to retain existing gas fired power plants and new build. In a written Parliamentary Answer in May it was announced that foreign imports of electricity have risen by 30% in just two years, highlighting a trend to rely more on imports as power plants at home close prematurely.

The new Government will need to address the growing conflict of interest relating to National Grid. This is a privately owned company listed on the stock market which owns the main national pipelines and the electricity transmission network, alongside having the responsibility for keeping the lights on and balancing the electricity network. It has huge commercial interests in boosting the import of more and more foreign electricity through undersea interconnector, irrespective of the wider negative policy implications.

The Perfect Storm
Earlier this month a ‘perfect storm’ of circumstances caused electricity prices to rise to record highs after unplanned shutdowns and the unseasonal heatwave led to a severe power crunch.  National Grid was close to having to issue an emergency ‘Notice of Insufficient Margin’ to call on extra power.  On the evening of September 14 forward electricity prices spiked from £40/MWh to £999/MWh.

A combination of very low wind output, the unplanned shutdowns of two nuclear plants, an outage with the interconnector with France and high energy demand led to this situation. This highlights the need for more baseload and peak load electricity generating plant.

Policies promoting renewables should be technology neutral and market based
The Government should accept that intervention in the energy market is not working. The Hinkley Point nuclear power plant deal is bad value for money, and a combination of EU and domestic interventions are leading to mass closure of baseload power plants before replacements are ready.

The Government is attempting to centrally plan Britain’s energy market. Market mechanisms have been squeezed out of energy policy to the detriment of consumers. The Government therefore needs to urgently review how its interventionist policies are damaging the UK’s energy policy, particularly on the carbon price floor and the promotion of renewables.

A new Energy Bill is required in a Post-Brexit Britain
Two days before becoming Prime Minister Theresa May delivered her first major campaign speech in Birmingham. A key extract which was welcomed by consumer groups and industry declared, “I want to see an energy policy that emphasises the reliability of supply and lower costs for users”.

The Energy Act 2013 is already out of date.  It was based around a flawed Department for Energy and Climate Change analysis, which assumed fossil fuel prices would continue to rise and that Britain would remain inside the EU and be bound by its directives and targets.

A new Energy Bill should take the opportunity of setting out how combining energy policy and a new industrial policy can deliver for the economy.

Pixie Energy is an incubator and a facilitator of strategic research and project work, focusing on energy regulation, policy and markets at the local and national level. Find out more about Pixie Energy here.

Local Energy Matters: Scotland is a free-to-download brochure with a focus on energy tariffs in the two Scottish electricity distribution regions, as well news on local energy and low-carbon schemes.

You can read an overview of the Scottish energy market here.